Restoration of the decors

Restoration of Bonaparte's House
Rehabilitation of the decors 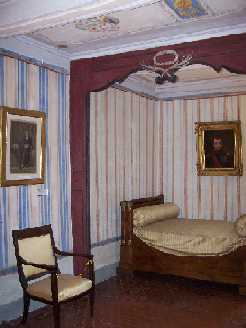 In 1852 Napoleon III became the owner of the house of his paternal forebears, but the house was empty of furniture and in terrible condition. In 1857, he took out a loan for 20,000 francs to restore the building, and instructed Alexis Paccard, the architect of the Palace of Fontainebleau to oversee the restoration works. Paccard entrusted the refurbishment of the interior of the Casa Bonaparte to Jérôme Maglioli, a painter, sculptor and architect from Ajaccio, who had also worked on the Imperial Chapel. So between 1857 and 1860, Maglioli directed the project to decorate the walls and ceilings in most of the rooms in the house, perhaps even undertaking some parts himself.

Sadly this decoration, outdated by the 20th century, was partly covered with distemper in 1956-1957. But the ceilings, decorated in similar fashion, were fortunately unscathed for the most part. During the work on extending the museum in 2002-2003, Marie-Lys de Castelbajac, tasked with restoring artworks revealed when the old part of the house was refurbished, discovered some of the original Napoleon III decors. Examples of each of these decors can now be seen.

By the end of 2006 all the decorations in all the rooms on the second floor had been revealed and restored. Until this point, they were completely unknown to the public.      A restoration team, led by Marie-Lys de Castelbajac, was commissioned to strip off the 248 m2 of distemper from the 1950s, and to return the major part of the 19th century decor to its former glory. This first programme of work was followed in the winter of 2007-2008 by repainting the woodwork on this floor, which again was all restored to its original Second Empire colours. The great discovery of this last project was the reappearance of the coloured decor in the alcove of the bedroom where Napoleon had spent his last nights in Corsica in 1799. The 19th century colours: red and black for the woodwork, gold and silver for the crowns and palmettes above the alcove, have been restored.

The spring of 2008 also saw the removal of the wallpaper in the Gallery on the first floor that had concealed the Napoleon III decor. The original decor in the smoking room has since been reinstated as well.

As with every famous person’s home, the Bonaparte House is keen to bring back the objects, furniture and documents that were originally here. The museum also aims to acquire personal memorabilia relating to the famous people who have lived in this house, both guests and owners.

The National Museum of the Bonaparte House is administered by the Château de Malmaison. Thus, acquisitions for the house in Ajaccio can be purchased through the State and RMN funding, sponsorship generated by the museum itself and, once established, the patronage of the Société des Amis du Musée de la Maison Bonaparte. Like all museums, the Bonaparte House benefits, or can benefit, from a gift by hand, a bequest or the Acceptance in Lieu scheme, whereby works of art are accepted in lieu of inheritance tax liabilities or transfer duties if an artwork is considered important enough to be part of the national heritage.