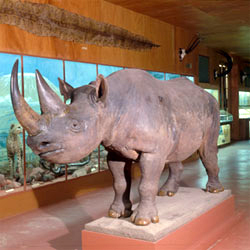 Baron Gourgaud was a great hunter, who organised, along with his friend Robert Rychner, three major expeditions to Africa in 1913-1914, 1928 and 1930-1931. During these hunts, he killed many animals that were subsequently stuffed by the most famous taxidermist of the time, Rowland Ward of London.

In order to present them in a setting recalling their native country, he commissioned a landscape painter, possibly Régnier, to produce several dioramas illustrating the fauna and landscapes of East Africa, such as Mont-Kenya, Kilimanjaro and the Sudanese savannahs. Another of his companions, Armand Van Mons, gave him many ethnographic objects for his museum, including some very rare masks from Gabon and an exceptional collection of knifes and shields.

Organised into two long galleries set at right angles, the African Museum was renovated by the Parisian architect Léo Polin advised by the director of the Natural History Museum in La Rochelle. He retained the typical 1930s design that Baron Gourgaud had wanted.