The story of the couple Bonaparte, seen through Josephine
Marie-Joseph-Rose Taschers of Pagerie, born in 1763 in Trois-Ilets in Martinique, takes the name of Josephine that by marrying Napoleon Bonaparte in 1796. He leads his meteoric rise and Empress coronation. It can not however give him the long-awaited heir and must resolve to accept the divorce in 1809.

Born in 1763 in Trois-Ilets in Martinique, Marie-Joseph-Rose de Tascher de la Pagerie spent a happy childhood on the family's plantation before being sent to Paris at the age of 16. There she married Alexandre de Beauharnais with whom she had two children, Eugène and Hortense, although this did not prevent the couple from separating. Both were imprisoned during the Reign of Terror in a former Carmelite convent; Joséphine alone escaped execution and was freed after three months of detention. 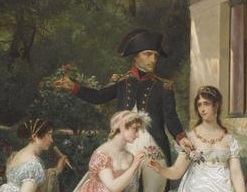 It was thus as a widow at the age of 32 that she met Bonaparte in 1795 in the social circles that had developed around Director Barras. The young Corsican general was dazzled by her charm and the ease with which she moved in the new society emerging at that time. They were married in a simple registry office service on 9 March 1796, causing anger and disbelief in the Bonaparte family who had not given their consent. She became known as Joséphine thanks to Bonaparte, who used the feminine version of her second first name, and followed him in his political career, being rapidly thrust onto the scene following the Coup of 18 Brumaire.

Despite threatening to renounce her for her sometimes frivolous behaviour, Napoleon extended his stature to her and crowned her Empress in 1804. She ruled alongside him for five years, but could not provide him with the heir he so dearly longed for and was thus forced to accept a divorce by mutual consent of both spouses pronounced by the Court at the Tuileries in 1809. This separation was as hard on Napoleon as it was on Joséphine, but he maintained her rank and her title of Empress, and granted her the enjoyment of the Elysée Palace, Château de Navarre and the Malmaison estate together with all of its collections.

She thus divided her time between travelling and expanding her collections, while devoting herself to her passion for botany. She grew closer to her grandchildren who stayed at Malmaison in the summer; the future Napoleon III would one day look back on these visits fondly. After the fall of Napoleon in 1814, she developed closer relations with the Allies, particularly Tsar Alexander I. On 29 May 1814 she died suddenly of a chest infection, surrounded by her children Eugène and Hortense in her chamber at Malmaison.

Upcoming exhibitions
Corsica at the birth of Bonaparte
From March 2023, 29th to July 2023, 3rd
END_OF_DOCUMENT_TOKEN_TO_BE_REPLACED